There are six games on the Wednesday slate of NBA DFS games for Moneyball.com.au players, check out our best value plays and sample lineup below!

Despite the fact that there is only six games on the slate there is a juicy $10,000 GPP slate on Moneyball for us to have a crack at.

Before we lock in our best value plays lets take a quick look at the game lines and totals for all of the games. 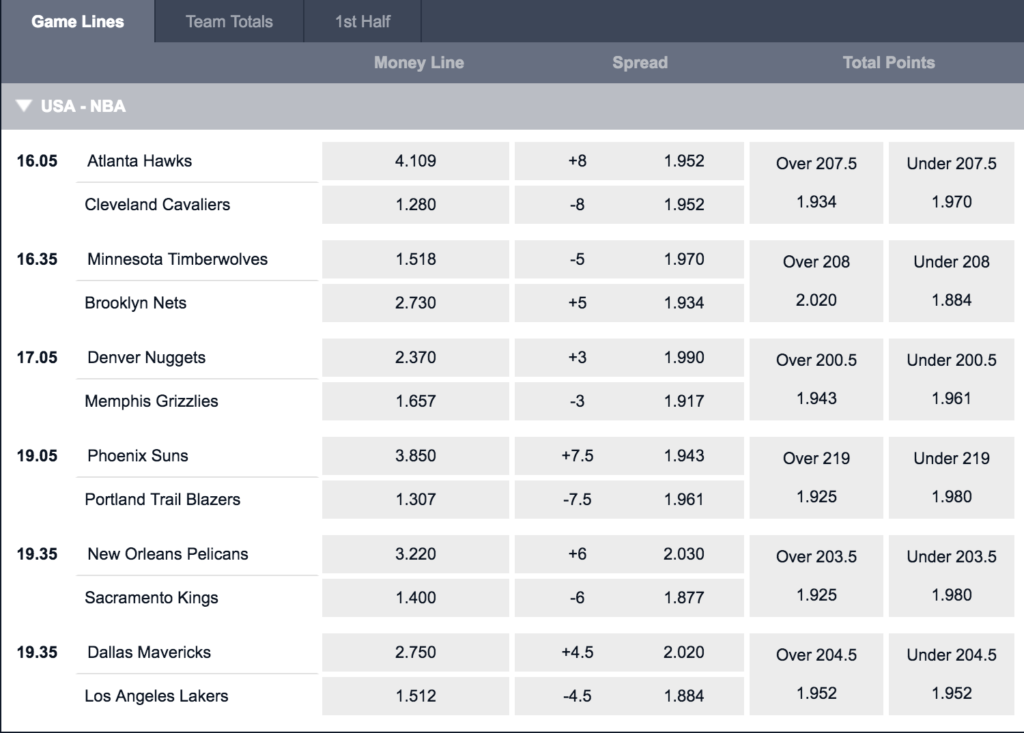 Looking at the lines above, clearly the highest total on the board is the Suns v Trailblazers game so we will be sure to include one of the high volume guards on at least one of those two teams.

The lowest total on the board is in the Nuggets v Grizzlies game while there doesn’t appear to be any great blowout candidate games besides perhaps the Cavs v Hawks game. Then again, almost every game the Warriors or Cavs play in has blowout potential.

SG – Sean Kilpatrick – Brooklyn – $4,700
Kilpatrick is a three-point gunner who has thrived in the two games Jeremy Lin has missed (scores of 31 and 41 on Moneyball) and he is set to get a stack of playing time again tonight despite Randy Foye returning to the fold for the Nets. Kilpatrick should play around 30 minutes and with his ability to get hot from the outside is a nice GPP option at projected low ownership levels.

SF – T.J. Warren – Phoenix – $6,100
Warren is the second highest priced SF on the board tonight behind King James but still appears to be a really good value option. He has scored at least 30 fantasy points in five of his last six games. A first-round pick in 2014 Warren looks to be starting to find his feet in the NBA and with a high projected points total and a fast paced game against the Blazers he will have another good chance to fill up the stat sheet.

PG – Damien Lillard – Portland – $9,400
Lillard is one of only two true premium point guard options on the slate today which is unusual for a position that is stacked across the NBA right now. He has small injury risk with his hand but as far as we can tell he is good to go and he has a terrific matchup against the Phoenix Suns in the highest projected points total game on the board. It’s a night with plenty of mid-range and bargain options so we are happy to pay up for Dame Dollar! We like the stack of Barnes and Barea amidst all of the injuries in Dallas. Even with a full squad Barnes seems underpriced. The same idea with Marc Gasol who will need to have a big game for the Grizzlies to compete without Mike Conley (likely OUT). Booker is consistent and will hustle the boards all night while Devin Booker continues his rise in the somewhat shallow shooting guard ranks.